​The Alabama Astrobotics Team participates in many outreach events each cycle. Events range from on campus demonstrations to elementary school visits, with the aim to inspire students to be involved and interested in STEM activities and careers.  We are always looking for new outreach opportunities!
Contact Us to Schedule an Event

Reach for the Stars!

Each year, Alabama Astrobotics welcomes visitors from across the country to visit our lab on the University's campus. We ask each visitor to place a blue dot on the map to mark their hometown. Each red dot on the map marks our team member's hometown.

Three members of the Alabama Astrobotics team traveled to Chilton Christian Academy in Jemison, AL. The team met with K-12th graders to give a short presentation on the team, our robot, and Space exploration. After the presentation, the students competed in a building challenge to build the tallest tower possible in ten minutes using only sheets of printer paper.

Alabama Astrobotics was invited to present virtually at the Alabama Mineral Institute. The team and faculty advisor Dr. Ricks presented on the difficulties of mining on the Moon and the resources reaped from the extraterrestrial body. The attendees of the Mineral Institute were very intrigued by the team and asked lots of thought provoking questions. It was an honor to be invited to this event. 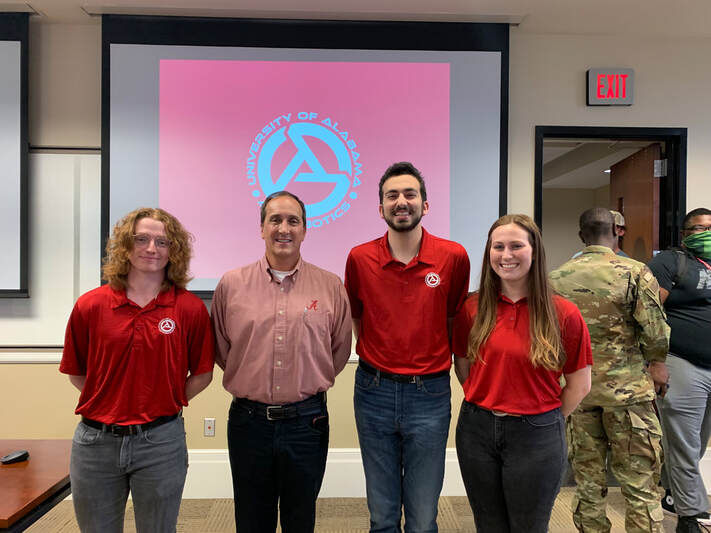 The University of Alabama Space Days is an annual event that brings together industry leaders in Space exploration and student groups on campus who share a love of Space. Alabama Astrobotics presented to interested students along with industry leaders on our work as a team.

This year, we had the honor of hosting two speaker events, the first with Monsi Roman and Angela Herblet an the second with Rae Ann Meyer with the Alabama Astrobotics Team.
Both Roman and Herblet, from NASA Marshall Space Flight Center, spoke on their work on the NASA Centennial Challenges and the Space Robotics Challenge respectively. Additionally, both ladies spoke on what it means to them to be a Woman in STEM.
Meyer is the Deputy Manager of the Science and Technology Office as NASA Marshall Space Flight Center. During her presentation, Meyer talked about her exciting career and how she rose to her exciting position at MSFC.
A recording of Meyer's presentation can be found on our YouTube Channel!

Alabama Astrobotics has worked with the Fort Payne Robotics Team as mentors this year while Fort Payne designs and builds a robot to compete in the FIRST Tech Challenge. The two teams have met virtually and in-person during this mentorship.